Someone once called me a butterfly, because of the way way I flit from domain to domain, trying to recast ideas from one domain into another. So to start the week, here's an idea from the world of radio that might be relevant to the world of library books: RadioDNS.

That FM radio in your mobile phone could, if it wanted to, connect to the internet to discover more about what it’s listening to. The DAB radio in that wifi radio you have at home can similarly connect to the web to get lots of information about the current broadcast. And listening to radio on your MP3 player could interact with the internet when it docks to your PC. In short, there are a lot of radio sets hidden within connected devices.

However, just because your radio also has an internet connection within it, that doesn’t instantly mean that it can find more information about what it’s listening to.

Which got me wondering - if I take a book out of the library, does that book provide me with any means of connecting to the wider context around that book via the web? 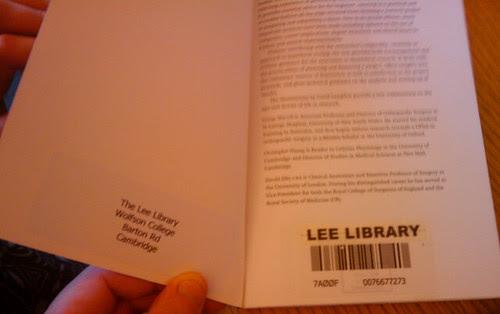 That’s where RadioDNS comes in. Put simply, it uses information that is already broadcast to create a kind ‘pseduo [sic] Domain’, which, by using standard DNS technology on the internet, can point your radio quickly and simply to the broadcaster – and from there, to advertise to the radio what this broadcaster supports.

So what information does the book carry? ISBN, possibly. If I've borrowed it from a library, it will almost definitely have a barcode attached to it somewhere (although is this necessarily the case with RFID'd books?) But just given the library affixed labels in the book, is there any direct link back to a web context for it? There isn't in the case of the book shown above, for example - no URIs anywhre in sight, (and the bar code isn't recognised by my phone's barcode reader, either... Hmmm...) 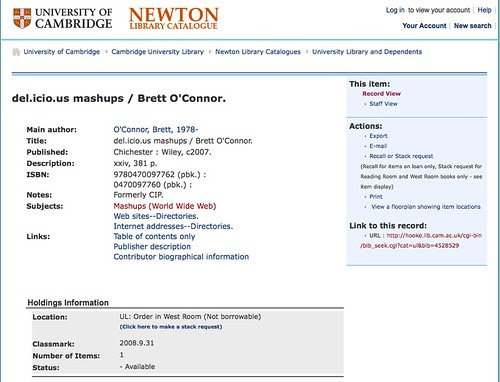 (The Subject Links lead to lists of resources related by subject/category, albeit two clicks away.)

So if I've borrowed a book from the Library, or I'm sat at a desk in th Library with a book and a web connection, how might I raise the web context for the book, and what might I want to do within that context? Here's what RadioDNS is looking at:

RadioDNS can support applications that combine broadcast and IP technologies. There are some applications already in development within the RadioDNS project:

* RadioVIS, a way of adding text and visuals synchronised to the radio programme
* RadioEPG, an electronic programme guide, that also allows a “universal preset” which will find your station wherever in the world you might be
* RadioTAG is a really interesting technology, not unlike Radio Pop, allowing you to ‘tag’ bits of the radio you find interesting. Whether it’s your favourite song, an interesting news story, or just something the presenter said that you thought was amusing. It’s then up to the broadcaster to keep those tags, to let you interact further when you’ve the time.

I imagine that RadioDNS endpoints will also support content negotiation (as in BookServer - Like URIPlay, but for Books...?), to provide you with content in a format appropriate for your local conditions (device, browser/client, locale, connection speed, subscription details etc.)

In RadioDNS, then, we see RadioDNS as providing a vector from a radio station you are listening to back to a web context for that station, a context that might include more information not just about the currently playing track, but also items related to that track, programme, station, community, and so on.

In the case of a book, the previous screenshot from the Newton catalogue provides links to both more information about the book, as well as related books, although it does not support a community around the book.

Some libraries are looking at how to support communities around books, though, as Lorcan Dempsey describes in a recent post on Community bibliography, where he explores an instantiation of Bibliocommons on the Ottawa Public Library Website:

What jumped out at me was how the block at the bottom of the screen was named: Community activity seemed like a very good name in this case.

The community features are interesting and feel familiar from other environments. A reader can 'connect' with others who have selected the item being viewed. The connections work across libraries in which Bibliocommons is deployed.

This adoption of a public social layer that can be federated across library catalogue UIs is something that it yet to be proven, although it's something I'd like to see succeed (I'm not sure if Aquabrowser's social tools operate across instances?)

(I'd also like to see loans data shared for the purposes of making better academic book recommendations, via initiatives such as JISC MOSAIC...;-)

What's also missing at the moment is any sense of course or research group context around a particular group. A couple of entries in the JISC MOSAIC competition tentatively explored the degree cotnext around books with a given ISBN, although not at a module level (where for example, related suggested readings, curricula, teaching materials and exam questions might also be brought in to play (cf. Looking Out for "Linked Course Data" and The Library's Role in Organising "Course Knowledge").

Just a quick comment about RFID tags and barcodes.

Although in theory if you have an identifier encoded on the RFID tag, it is usual to also put a barcode and printed version of the identifier in the item as well - this means that if the RFID tag fails (or no reader is to hand) you can still match the item to its record on the library system.

In terms of information encoded on the RFID tag, it was initially common practice to only encode a minimum amount of information - basically the identifier - and rely on the system to provide all other details. More recently it has become more common to encode fuller information (bibliographic metadata, loan status etc.) on the tag. This has been somewhat controversial partly because of the lack of a standard approach to this in the UK (leading to potential incompatibilities between systems and vendor lockin). This has started to change now with the recent announcement of a vendor alliance to implement the ISO 28560 tag data standard and the UK National Profile that relates to how this will be implemented in UK. Mick Fortune's blog is a good place to start for information around this debate (see http://www.mickfortune.com/Wordpress/?p=90 and http://www.mickfortune.com/Wordpress/?p=162 and other posts)