If anyone ever asked, I'd be the first to admit that my knowledge of current citation/reference management tools and their capabilities is patchy, in part because I tend to live in the flow rather than the world of scholarly articles. That said, I do occasionally play with some of the free tools that out there such as Zotero:

Playing around with Mendeley earlier today, I started to wonder whether it might be an appropriate tool for publishing reading lists, and it seems that this is on of the possible use case that the Mendeley team have been exploring: Share recommended readings using Mendeley’s Public Collections.

The idea is to create a collection, add the reading list items you have selected to it, and then publish the collection as a public one. Once published, the recommendation list appears on it's own web page with tools that allow individual items to be added to another user's personal collection, as well as letting them subscribe to the whole list either in Mendeley or via RSS in a generic feed reader: 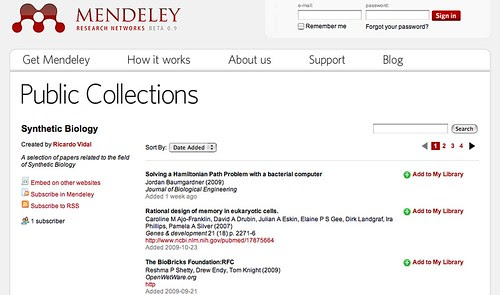 The list can also embedded in a third party site as the following example demonstrates:

This approach looks like it might be particularly useful for reading lists that are built around journal references. A good example of such a list can be found at the Department of Plant Sciences in Cambridge - Part II Reference Lists: Module M1: 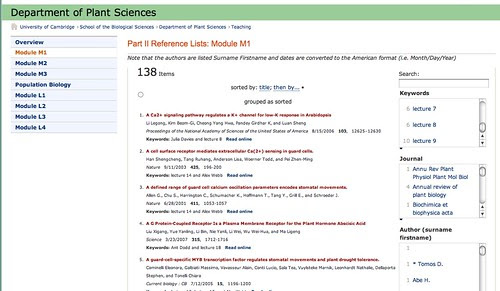 That said, it seems like the Plant Sciences folk have a pretty good system in place already - list contents can be displayed for the course as a whole, or for individual lectures, which I suspect is really handy; citations by author and journal can also be identified. What they don't do, though, is provide the portability that Mendeley Public Collections do via the Mendeley Collection subscription feeds...

PS just in passing, it's also interesting to note how the Plant Sci lists link trhough to documents - via DOIs: e.g. http://dx.doi.org/10.1073/pnas.0605129103; I wonder - could they also offer a link for Cam users by running the resolved DOI through something like libezproxy to handle authentication issues?
Posted by Unknown at 10:45

Thanks for your comments on the shared collections feature. Your question about site-specific access is one that comes up frequently, so let me assure you that site access via something like ezproxy or OpenURL is something Mendeley is working on.

If you have any follow up questions, please don't hesitate to get in touch.

BTW, if you ever find yourself giving a presentation about reference managers, Mendeley has some teaching materials available.

DOI's in that list could be passed to Cross Ref via our OpenURL Resolver. As well as checking that a Cambridge subscription was in place for the work, the resulting URL would be routed via our proxy server, which in the case of nature, is vital for off campus access.

Our Resolver takes the citation information from CrossRef with DOI
and checks it against Cambridge holdings.

The links supplied are to our subscriptions. As a result it is a more useful if slightly less elegant solution for the Cambridge user.