Do Libraries Cater for Today's Researchers and Research Students?

A recent story in the Times Higher reviews an interim report from "[a] three-year study by the British Library, Researchers of Tomorrow, [which] is tracking the research behaviour of doctoral students born between 1982 and 1994 - dubbed 'Generation Y'" (Next-gen PhDs fail to find Web 2.0's 'on-switch', via Peter Morgan/@tweeterpeter) describes how researcher are making use of 'emerging technology' tools. The THES describes how interim results:

... show that only a small proportion of those surveyed are using technology such as virtual-research environments, social bookmarking, data and text mining, wikis, blogs and RSS-feed alerts in their work. This contrasts with the fact that many respondents professed to finding technological tools valuable.

Just under half of those polled used RSS feeds and only about 10 per cent used social bookmarking, with Generation Y students exhibiting the same behaviour as other age groups.

The study also shows that when it comes to getting help with the tools, Generation Y students are likely to turn to their peers or supervisors rather than library staff. Dr Newman said this could suggest that library professionals need to rethink their work in this area.

The study found that Google and Google Scholar are the main sources used by doctoral students to locate information; that only about half have been trained to find journal articles; and that far fewer have received any training in using more advanced technological research tools, such as e-research.

We can find a full copy of the report (PDF)) - which was not linked to from the THES story? - on the project website Researchers of Tomorrow Project.

So what sort of training is acknowldged in the 5,408 completed questionnaries: 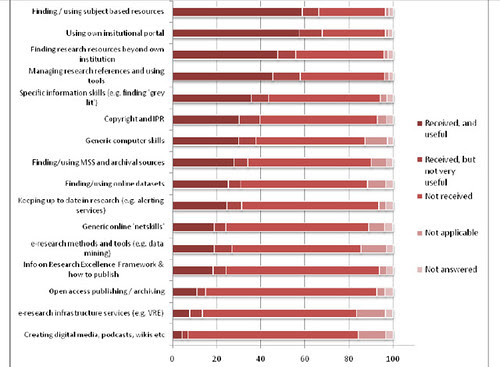 So what sorts of information do research students look for? 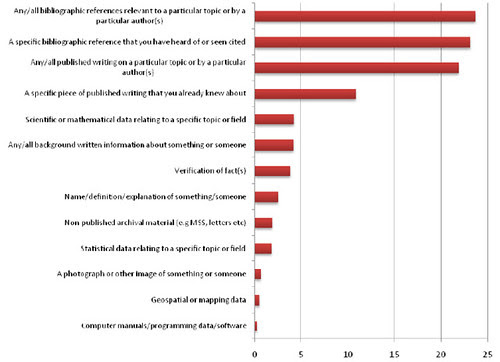 And where do they look? 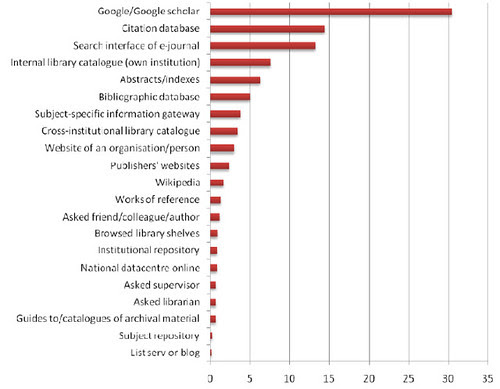 Ask a teen how the libraries are doing and they'd probably say: "looooo-zerrrrr". Or maybe #fail.

Libraries are go to places for support though, right? 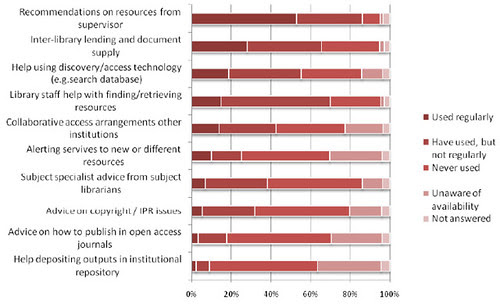 Well, maybe, for some things... What jumps out at me though, is the low uptake in alerts, and 'subscriptions' to possibly by extension subscription to persistent search feeds.

This is borne out by the relatively low proportion of people who make use of subscription RSS/alerting services: 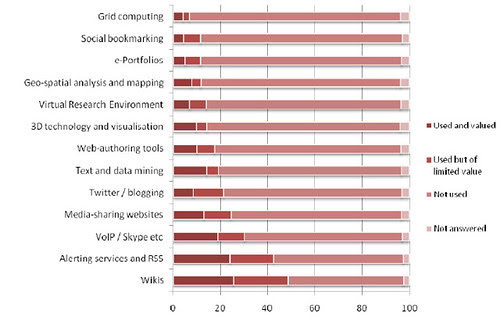 (For more on this, a separate small scale study with only 21 surveyed participants looked at how young researchers uses subsciprion tools (Preliminary findings of user trials (Bayesian Feed Filter). Whilst 11 researchers used email alerts, only 2 used RSS feeds. Discovery of new and interesting papers was predominantly (16 people) by searching (my emphasis) latest articles.)

I'd like to think that the increasing ease of use of geo-related tools and visualisation tools will be reflected in the increasing uptake of these tools, although there again I'm not sure that I'd immediately think of going to the library to ask how I might visualise on a map all the UK HEI Libraries (a 5 minute job if you know: a) where to find the data; b) how to geocode it using free tools; c) render it on an embeddable map)...

This question of whether it's the Library that should be the go to place for information (let alone the use of information visualisation tools) about online information tools is ne I touched on very briefly in IT Skills or Information Skills?.

If the Library is there to serve the information needs of the learner or researcher, then it requires the provision of support in the use of available electronic information technologies, as well as card catalogues...

But whilst many Libraries do already offer skills training on the more effective use of 'public' services such as Google (e.g. search for google (training OR tutorial) on UK HEI Library websites (via Open Library Training Materials and Custom Search Engines), could they be doing more?

As patrons get more of their information needs satisficed from sources outside the immediate control of the Library, if the Library is to contribute to developing this activity (in terms of maximising its effectiveness), then this part of the Library's role needs to shift towards supporting how patrons discover those resources, whether or not the Library has any say in the way those resources have been collected.

Consider it this way: if you believe that one reason why Libraries develop collections is in order to support discovery of proven quality resources, then the Library can still fulfil this role. For example, it can play a role in developing an understanding about how to make effective use of everyday tools to support discovery and management of resources. Just because the folk previously known as library patrons no longer access information via the Library, does that mean that the Library shouldn't be a go to place for students and researchers who want to access the information that the Library might traditionally have provided unique access to, but that is now more widely accessible through a variety of routes. If part of the Library's role is helping people find resources, then if you look back from those resources to the tools that most people use to discover the resources, aren't those the tools you need to support in some way?

Finally, what must be remembered is that the tools that are most likely to be used, (particularly when a student graduates from the academy), are likely to be free public tools.... but they are no less powerful for being that...
Posted by Unknown at 16:02