Emma Coonan, Jane Secker and Helen Webster gave a great seminar presentation  at LSE on the new curriculum for Information Literacy that emerged from Emma's and Jane's Fellowships.  (Helen is now working on implementation issues.)
Posted by John at 21:34 No comments:

LOCKSS (Lots of Copies Keep Stuff Safe), based at Stanford University Libraries, is an international community initiative that provides libraries with digital preservation tools and support so that they can easily and inexpensively collect and preserve their own copies of authorized e-content. LOCKSS, in its twelfth year, provides libraries with the open-source software and support to preserve today’s web-published materials for tomorrow’s readers while building their own collections and acquiring a copy of the assets they pay for, instead of simply leasing them. LOCKSS provides fully managed preservation and 100% post cancellation access.

LOCKSS site
Posted by John at 16:06 No comments:

Do you have an open access publishing policy for the outputs of the project?
Will you make the data openly available, or is some of it not appropriate to do so? If so, where will you put it?
Will there be one main individual in charge of social media communication or is it just distributed across the group?
Will you have specific twitter/blog/youtube accounts for the project or do individuals in the project have a high online reputation it would be better to utilise?
How will you incorporate analytics into the project? Do you expect to get a certain number of views, dwell time, global distribution, etc on a main site?
What media will you use? For example, will you create a 'trailer' video for the project and an overview of the findings?
How will you archive discussion around the research, eg twitter hashtag conversations?
Will you provide a curation service, eg a Scoop-It page of relevant resources as you go along?
Are there new methodologies you will employ, eg crowdsourcing?
Is there a planned release for findings throughout the project? Will any aspects be not open for dissemination eg via twitter or blogs?

John Palfrey -- of Harvard Law School and the Berkman Center -- is taking a close interest in library issues and delivered the closing plenary session at this year’s SSP Annual Meeting. Kent Anderson has provided a useful summary of what he said.
Posted by John at 23:26 No comments: 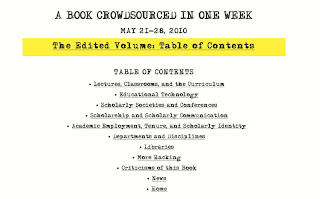 The full list of contents for the edited volume is now available. Over 200 scholars took part in the project. All the contributions are online here.

Fascinating project.
Posted by John at 18:39 No comments:

The Architecture of Access to Scientific Knowledge from lessig on Vimeo.

Adding another chapter to a long, drawn-out legal saga, a New York federal district court has rejected the controversial settlement in a class-action suit brought against Google Books by the Authors Guild, a publishing industry trade group.

"While the digitization of books and the creation of a universal digital library would benefit many, the ASA would simply go too far," a court document explains. "It would permit this class action--which was brought against defendant Google Inc. to challenge its scanning of books and display of 'snippets' for on-line searching--to implement a forward-looking business arrangement that would grant Google significant rights to exploit entire books, without permission of the copyright owners. Indeed, the ASA (Amended Settle Agreement) would give Google a significant advantage over competitors, rewarding it for engaging in wholesale copying of copyrighted works without permission, while releasing claims well beyond those presented in the case."

The settlement would grant Google the right to display excerpts of out-of-print books, even if they are not in the public domain or authorized by publishers to appear in Google Books. When the settlement was initially announced in mid-2009, opposition flooded in from lawyers on behalf of Microsoft, the Electronic Frontier Foundation, and a coalition called the Open Book Alliance who decried it as anticompetitive.

"Google and the plaintiff publishers secretly negotiated for 29 months to produce a horizontal price fixing combination, effected and reinforced by a digital book distribution monopoly," a lawyer for the Open Book Alliance said at the time. "Their guile has cleared much of the field in digital book distribution, shielding Google from meaningful competition."